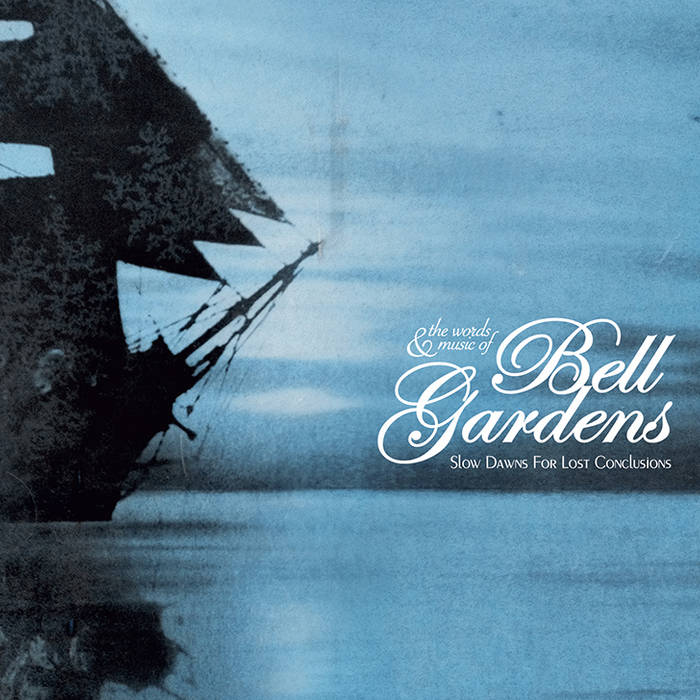 Bell Gardens combines the musical visions of Kenneth James Gibson (formerly of Furry Things, now recording as [a]pendics.shuffle, dubLoner and Eight Frozen Modules) and Brian McBride (one half of Stars of the Lid) and began releasing music in 2010, beginning with an EP, Hangups Need Company on Failed Better/Burger Records. Their debut album Full Sundown Assembly (Southern/Burger Records) appeared in 2012 and, now signed to Rocket Girl in the UK, the band are set to release their second, Slow Dawns for Lost Conclusions, in September 2014.

Bell Gardens’ origins began arguably as more of an experiment than the duo’s current ‘experimental’ projects – McBride’s drone- and string-laden ambient symphonies, and Gibson’s ventures in dub and minimalist techno – as they sought to manifest their mutual reverence for folk, psychedelia and chamber pop in a traditional band structure without cannibalising any particular past genre. Bell Gardens’ sound is less reliant on effects and studio trickery than the pairs’ independent guises, laying bare as it does vocals and live instruments with emotional sincerity, and presenting songs imbued with an almost pastoral or gospel simplicity and timelessness.

Developing the plaintive widescreen Americana found on its predecessor, Slow Dawns for Lost Conclusions is a record that, for all its subtlety, exhibits unashamed candour and is elevated by a much wider palette of players. While Full Sundown Assembly was recorded by McBride and Gibson working in tandem at home studios, Slow Dawns for Lost Conclusions sees their personnel expand to include the live incarnation of the band: Julian Goldwhite (pedal steel), Chris Camacho (bass), Charlie Woodburn (drums), Mark Colgrove (keys), with additional keys by Marty Stewart and Buchla synth by Dain Luscombe (now a full-time member of Bell Gardens), who features on the bonus cover of Kris Kristofferson’s ‘Why Me, Lord’ along with wife Julie Carpenter on strings.

Slow Dawns for Lost Conclusions was again recorded mostly at home studios, but additionally the band made use of a friend’s desert cabin in Wonder Valley, California, and it seems this willingness to retreat from the city has lent an expansiveness to the tracks, in particular the spacious, ceremonial ‘Silent Prayer’ (written in a snowbound mountain cabin in Idyllwild, C.A.) and the crepuscular ‘She’s Stuck in an Endless Loop of Her Decline’ (mapped out under the stars in the desert).

While the addition of strings (contributed by Lauren Chipman of The Rentals and The Section Quartet) and trumpet (Stewart Cole of Edward Sharpe and The Magnetic Zeros) provides a double rainbow of tonal textures throughout, the nine tracks of Slow Dawns for Lost Conclusions are united by an understated elegance belying the newly expanded, communal effort in the studio: each instrument earns its place, nothing is overwrought or conspicuous. Moreover, it is McBride and Gibson’s artistry in building stirring soundscapes from the barest of materials in their other guises that lends such assurance and sophistication to these arrangements.

The band is a result of the complimentary cross-pollination of Gibson and McBride’s musical tastes – borne from a late-night conversation between the two that grew wings – and it is the universality of the sentiments and their restrained, reflective approach to writing and recording that allows the music to simultaneously straddle the past and the present. The music avoids pastiche, its pedal steel, sleigh bells and harmonies giving a nod to the ghosts of musical genres past, but never overriding or distracting from the emotional content of the sum of its parts.

The album ends with the glorious ‘Take Us Away’ – one of the first demos Gibson gave McBride when he was on tour with Stars of the Lid – neatly bringing their work to date full circle and exemplifying the band’s mindfulness of their own serendipitous beginnings: the dawning of an auspicious, unique musical force.

Bandcamp Daily  your guide to the world of Bandcamp